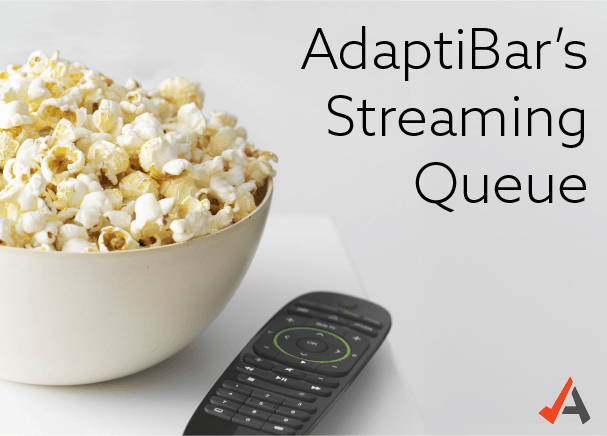 Between stay-at-home orders and wrapping up semesters, law students are certainly going to be spending a lot of time on the couch for now. With so many options for streaming content, picking a show or movie to settle on can seem daunting. Never fear! AdaptiBar has rounded up all of our favorite legal television shows and films available for streaming right now. Kick your feet up and let us handle the queue!

This exciting prequel to Breaking Bad follows the shenanigans of “ace” attorney Saul Goodman and his nefarious associates.

A thrilling mix of business and legal antics of a large firm. Accurate? Not at all! But that only makes it better.

In this legal drama, an attorney uses her husband’s political scandal to launch her own career.

Billy Bob Thorton stars as a washed-up ambulance-chasing attorney trying to redeem himself in this gritty drama.

Often called the most accurate depiction of law firm life ever, this legal drama is set in Boston and stars Dylan McDermott.

This delightful gem stars Albert Brooks in a topsy-turvy situation: trying to defend his own life to a judge and jury in the afterlife.

Bend and snap this old favorite in!

Matt Damon, a struggling new lawyer, dips his toes into shady business in this fast-paced drama.

Matthew McConaughey stars in this exciting and suspenseful film about a charismatic lawyer who does business from his Lincoln sedan.

While this movie may be about the founding of Facebook, a deposition is the setting of the film and legal elements play key plot elements.

Consider streaming any of the above legal television shows and films for a much-needed break from reality! And feel free to comment below with your reviews!