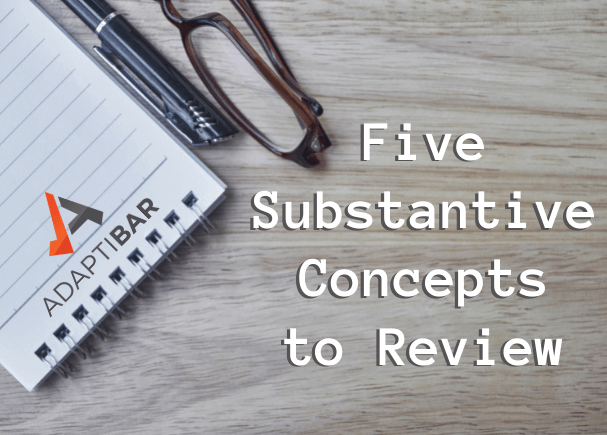 The July bar exam is getting closer, and now is a great time to review everything you have been studying for weeks. To help with your review, our legal team has identified five substantive concepts we see students struggling with. This is a great opportunity to check in and refine your understanding of these concepts. Follow along and compare to your own notes to find areas of improvement.

Past recollection recorded is a hearsay exception that allows a witness to prove the contents of a writing, as long as the witness (1) made or adopted the record, (2) based on firsthand knowledge, (3) when the matter was fresh in the witness’s mind, (4) which accurately reflected the witness’s knowledge. The witness must be testifying, and their memory must be exhausted. The writing may be read into evidence. It may not be admitted as an exhibit to the jury unless offered by the adverse party.

Refreshing (present) recollection differs because it is not a hearsay exception. The instrument used to refresh the witness is not the evidence. The witness’s own testimony is the evidence. This concept is often not referred to by name, which means you should be familiar with the idea that anything may be used to refresh a witness regardless of the document’s author, source, or truth. The only requirement is that the witness’s memory must first be exhausted. The witness may review the instrument, then it must be taken away, and the witness must testify from their own memory. The instrument cannot be read or played into evidence and may not be shown to the jury.

2. The differences between Issue and Claim Preclusion

Claim preclusion, also known as res judicata, is raised when a party thinks that a particular claim was already, or could have been, litigated and, therefore, should not be litigated again. To determine if claim preclusion applies, the court will usually look at three factors: (1) whether there was previous litigation in which identical claims were raised, or in which identical claims could have been raised; (2) whether the parties are the same parties as those who litigated the original action; and (3) if the original action has received final judgment on the merits.

Issue preclusion, also known as collateral estoppel, prohibits the exact same issue of fact or law from being litigated again. There is a three-prong test for applying issue preclusion: (1) whether the issues in the first and second litigation were identical and have been before a court; (2) whether the issue was litigated; and (3) whether a judgment was rendered.

Once a plaintiff has established that a defendant was negligent and that the defendant’s negligence was the cause in fact of the plaintiff’s injury, the plaintiff must also establish a separate showing that the defendant proximately caused their injuries. In this way, the proximate causation requirement is actually a policy determination arising from the judicial idea that a defendant should not automatically be liable for particularly improbable or far-reaching consequences. Essentially, the concept of proximate cause is what the courts will use to determine how far the defendant’s liability extends for unforeseen consequences.

UCC and common law contract formation differ from each other in several key ways. First, Under the UCC, any manner that shows agreement to contract (i.e., words, actions, writing) will serve to form a contract. Under the common law, mirror image acceptance, where the offer is accepted with no modifications, is required. Second, common law contracts must have essential terms that are definite. Under the UCC, on the other hand, the only required term is quantity. Everything else, including price, can be decided later. Finally, it’s important to remember which kinds of contracts are governed by the UCC, and which are controlled by the common law. Contracts for the sale of goods fall under the UCC. Contracts for services and for interest in real estate are governed by the common law.

Before any federal court exercises jurisdiction over any case, the plaintiff must meet the “case” or “controversy” requirement of Article III. Whether the court has jurisdiction depends on four factors:

Make sure you are reading each question carefully! Taking your time will prevent you from losing easy points to reading comprehension. Pay attention to the facts and trust your instinct. Wishing you the best of luck!

Do you have questions about how AdaptiBar can help you master the MBE? Check out these frequently asked questions to see what most people are asking.