The Future Is Now: Why State Judges Support the Uniform Bar Exam (UBE) 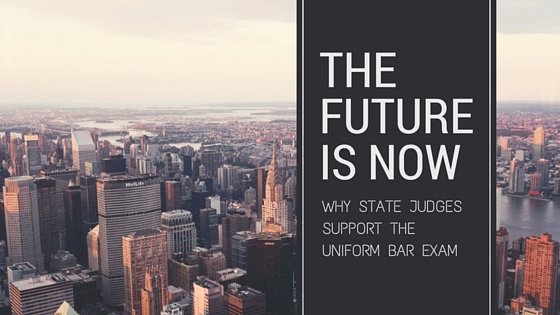 In May 2015, Chief Judge Jonathan Lippman announced that New York would be making changes to administer the Uniform Bar Examination (UBE) beginning in July 2016. Upheld by many as the “gold standard” of law, New York was the sixteenth state to change its traditional testing model to one that would better satisfy the needs of law students today. Six jurisdictions have followed since, most recently New Jersey, resulting in a total of 22 jurisdictions currently using the UBE to test students’ knowledge of the law.
The Uniform Bar Exam is given over a period of two days, taking place on the last Tuesday and Wednesday of each February and July. It is composed of 3 parts – the Multistate Essay Exam (MEE) and Multistate Performance Test (MPT) on the first day, and the Multistate Bar Exam (MBE) on the second. What makes this exam so “uniform” is its standardization from state to state. The UBE tests universal law principles rather than state-specific information, so scores are essentially “portable”, or transferable, in states that also administer the exam.
Although the UBE has been criticized by some for removing state law, states have worked to ensure that the quality of its lawyers is not at all tainted by the new testing model. For example, New York still requires all law students to pass the New York Law Course, New York Law Exam, and complete 50 hours of pro bono service in addition to the UBE. States also set their own passing scores. With 400 considered a perfect score, New York and New Jersey both require a 266 to pass.
It is also important to note that, in order for scores to be portable, an examinee must achieve the passing score of the jurisdiction in which they desire to practice law. For example, a Minnesota examinee that scored a 260 could practice in Alabama, Missouri, New Mexico, and North Dakota, but not New York or Alaska. The chart below outlines passing scores for all current states that have decided to administer the UBE.

The majority of law students will agree that switching to the UBE is a positive change. What may be surprising, however, is that the majority of state judges also agree. Despite popular rumors, the UBE is not any easier than previously administered state bar exams. However, it may be easier for students to get a job by taking it.
With the portability of UBE scores, law students save large amounts of time and money, and the overall public has access to greater legal resources, especially in under-served areas.  Said Jonathan Lippman, “A nationally administered UBE is not only desirable but necessary for the mobile, interconnected society in which we live.” The Uniform Bar Exam was adopted in New York when state law school enrollment was the lowest it had been in 42 years. According to federal judges, the UBE encourages student enrollment by offering a greater number of opportunities after licensure. Thus, the Uniform Bar Exam is an optimal solution for connecting the needs of present society with those of future lawyers.
“Although we lag behind other professions in uniform licensing exams, progress is now being made…” said Lipmann. “We very much expect that New York’s adoption of the UBE will reverberate among the other states and that the UBE will become the standard throughout the country.” In other words, the UBE is more than the way of the future – the future is now.
What’s your opinion of the UBE? Will 2016 be the year the Uniform Bar Exam becomes administered in all jurisdictions?