Your Guide to Being a Virtual Law Student: Mindset Edition 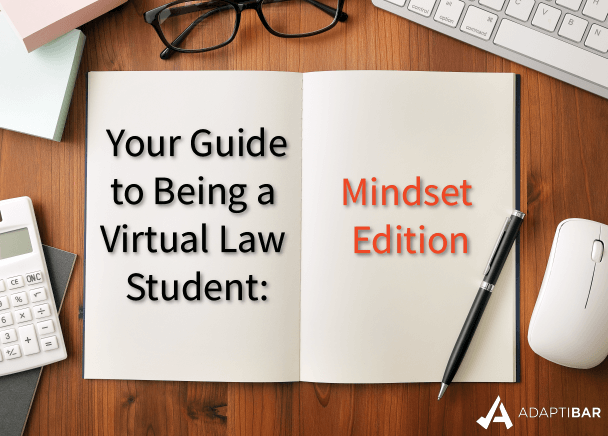 The first concept taught in law schools is pretty simple: “Think like a lawyer.” This axiom, repeated breathlessly by professors and administrators alike, appears self-explanatory at first glance. Anyone can think like a lawyer! That just means being tenacious and argumentative, right?

Of course, like most aspects of law school, “thinking like a lawyer” is more complex than it seems. As law students make their way through the curriculum, professors guide them with an analytical framework that requires students to state the issue and rule of law of a particular legal question BEFORE making any legal conclusions. This process is commonly known as IRAC (Issue, Rule, Analysis, Conclusion), and gradually all law students realize using this method is “thinking like a lawyer.”

As you can probably see, thinking like a lawyer isn’t helping many law students struggling with the effects of a global pandemic. And it’s not hard to see why. Thinking like a lawyer depends on two things: (i) having access to all the information you need to analyze something and (ii) analyze it under a previously–set standard. A sudden pandemic halting the economy is quite literally unprecedented, so thinking like a lawyer won’t help. But what will?

What do we know?

The NCBE writes and distributes the UBE, MBE, and MPT materials. However, the NCBE does not handle the licensure of lawyers. Lawyers are licensed on a jurisdiction-by-jurisdiction basis, and these jurisdictions are the final word on whether a bar exam will happen as planned. The NCBE has a page here with updates from jurisdictions on their plans for the summer bar exam.

Jurisdictions have been responding to the pandemic without uniformity, but some major trends have emerged.

Supervised practice: Some jurisdictions, including New York, have opted to forego the July bar exam and administer another exam when able, allowing lawyers to practice under supervision in the meantime.

Diploma privilege: Utah has opened a pathway for graduating 3Ls who attended a school with an 86% bar exam pass rate to practice without sitting for the bar. Read more on this here.

Fall bar exam: The NCBE has indicated they are working on making a fall bar exam available on two different dates. September 9-10 and September 30-October 1. Read more about this here.

What predictions can we make?

New research about COVID-19 is being uncovered all the time, and federal, state, and local governments have been acting as quickly as possible to contain it, which leaves people like law students in the lurch. However, the most helpful action you can take right now is (pardon the pun) become more adaptable. When you expect the unexpected, stress around uncertain times can start to melt away.

Here are some ways to help yourself become an adaptable future attorney during the pandemic: