How is the MBE Portion of the Bar Exam Scored? 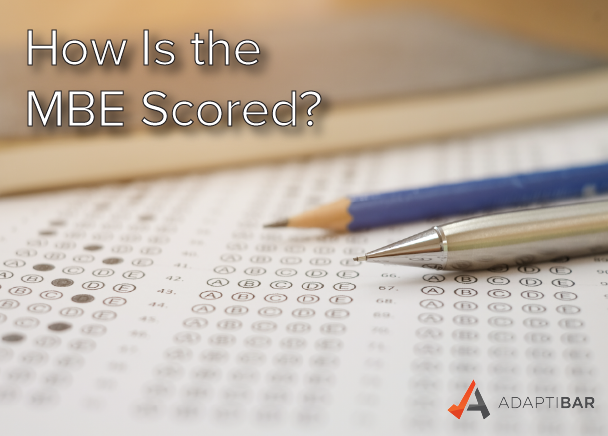 The MBE consists of 200 multiple-choice questions on the first-year law courses: Criminal Law and Procedure, Civil Procedure, Contracts, Evidence, Real Property, Torts, and Constitutional Law. You’re given a set of 100 questions in the morning session and the second set of 100 questions in the afternoon session. You have three hours for each session, and all topics are tested in the morning and afternoon. It seems fairly basic, right?

According to the official NCBE website, the performance information provided for the MBE is a “scaled score.” This scaled score can range from 40 to 200, and is calculated based on a confidential “statistical process.” The process adjusts the score on the current exam, to scale it to the difficulty of past exams. This is why it isn’t possible ahead of time to find out how many questions you need to pass. It’s not like popping a scantron into a machine reader, there is a complex analysis going on behind the scenes at the NCBE before you get your score.

The scaling for any individual exam will never be released and varies based on the test so test-takers will never know what percentage will be required to pass. The MEE and MPT are combined and then scaled to the performance on this year’s MBE (meaning that the distribution will have the same average and standard deviation). Those scores are combined and must be greater than the threshold set by your state for you to pass the bar.

Your performance on the MBE is based on how many of those 175 questions you get correct. The formula for converting from the raw score to the scaled score is unique to each MBE and known before any student answers any real question. This formula is calculated based on previous applicants’ performance on the experimental questions.

Why is Your MBE Score Calculated in This Way?

The reason for this is pretty simple. The curve itself helps to remove the effects of variations in test difficulty. A difficult test will have a more forgiving curve than an easy test to account for the lower raw scores. Scaling based on prior examinees allows consistent interpretation between test administrations. Using previous responses, the NCBE can develop an expected mean and standard deviation for the test and scale the raw scores so that they fit the expectations for the bar based on prior examinees.

Only the NCBE knows the experimental mean and standard deviation. There is no way for us to predict what raw percentage of questions are required to pass the bar exam because it varies based on the difficulty of the exam. What does this mean for those who are taking the exam? Remember: answer EVERY question! This is the best way to maximize your scaled score opportunities. Already taken the exam and curious about how the MBE is scored? Well, as your 1L professors would say: “It depends!”