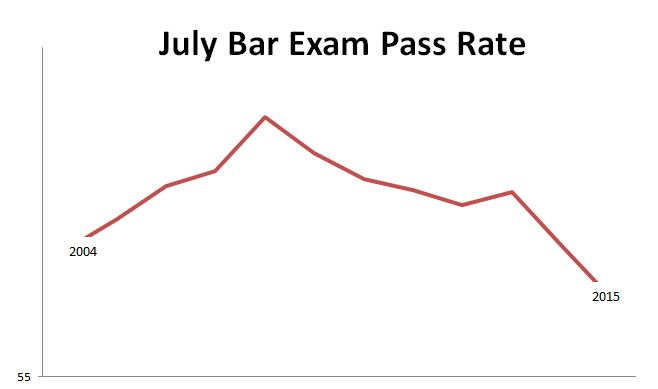 July 2014 marked an uncharacteristic time for bar exam results…at least, so it seemed. Scores were unusually low, with a significant decrease in exam pass rates for several states. When questioned about this dramatic shift, the president of the National Conference of Bar Examiners issued a statement that contained the following allegation about July 2014’s bar examinees:
“While we always take quality control of MBE scoring very seriously, we redoubled our efforts to satisfy ourselves that no error occurred in scoring the examination or in equating the test with its predecessors. The results are correct. . . All point to the fact that the group that sat in July 2014 was less able than the group that sat in July 2013.”
As one can imagine, the implication that July 2014 examinees were “less able” than those in previous years led to heated debates about whether or not law students really were to blame for declining scores. The controversy was never fully resolved, but this year’s bar exam results for July 2015 may bring greater insight (and attention) to this issue.
According to Bloomberg Business, the July 2015 bar exam results were the lowest they’ve been since 1988, dropping an average of 1.6 points on the MBE as well as 1.6 points overall. More specifically, the average mean exam score in 2014 was 141.5, falling to 139.9 in 2015.
This time around, Erica Moeser blames the economy for decreasing scores. She claims, “It was not unexpected. We are in a period where we can expect to see some decline, until the market for going to law school improves.” This statement also indirectly points the finger at law schools, who may be accepting students that aren’t all that qualified to go to law school in the first place. In other words, law schools are allowing “less able” students through their doors in order to survive financially.
However, there are other possible explanations as to why bar exam results are becoming consistently, well, worse. After all, this is the first July exam that has included questions from the seventh MBE subject, Civil Procedure. Since February 2015 marked the first time this subject was included, there is still little known about how it is tested on exam day, which could negatively impact students’ studying.
Ultimately, it is difficult to pinpoint the exact cause of decreasing bar exam scores. What can be assessed, however, is the impact that this decrease will have on the law field. Now that a trend in scores is beginning to appear, it is likely that this issue will begin receiving an increasing amount of attention from law students, lawyers, law schools, professors, and the NCBE if it is not resolved.
What may be anticipated is a snowball effect; as the amount of law students that do not pass the bar exam increases, more and more students will demand that the National Conference of Bar Examiners investigate the exam’s level of difficulty. In turn, the NCBE may turn to law schools to implement more rigorous curriculum or admission standards to better prepare their students for the bar exam.
Although the future cannot be fully predicted, the July 2015 bar exam results show that the debate as to who is to blame for declining scores is far from over. In the meantime, it is essential that upcoming bar examinees are aware of this trend so that they are better able to prepare for the next bar exam.
If you’re planning on taking an upcoming bar exam, increase your chances of passing by reading this article!