What You Missed While Studying for the Bar Exam

By The AdaptiBar Team August 6, 2019 No Comments 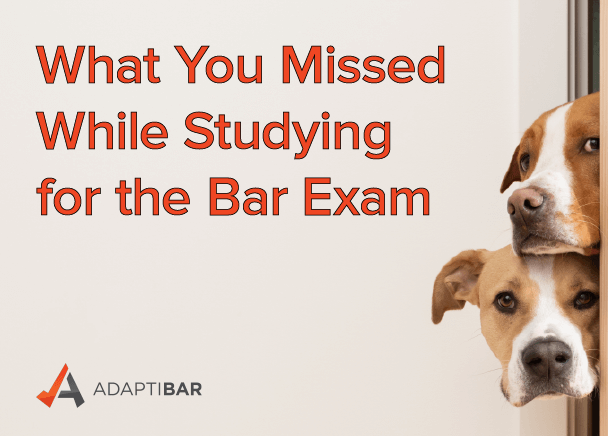 Your bar prep has finally come to an end! Now what? Do you even remember what life was like before spending countless hours drilling AdaptiBar questions? Better yet, life before law school entirely? Odds are that all feels like a distant memory now. While you were busy hitting the books all summer, we have been keeping an inventory of all the news, trends, and current events that may have gone under your radar this summer. Keep reading for your Summer 2019 Recap!

PS: You’ll definitely want to read all the way to the end!

Avengers: Endgame was released on April 26th and now officially holds the record for the highest-grossing film ever at the global box office, bringing in around $2.8 billion. The film was re-released on June 28th with additional footage in order to take over the record from Avatar. Along with the release of Spider-Man: Far From Home on July 2, this marks the end of Phase 3 of the Marvel Studios superhero movie series.

The 4th installment in the Toy Story series released on June 21st, 2019. This movie was highly anticipated as it had been 9 years since the release of Toy Story 3. The film introduced brand-new characters and received a 97% critics’ rating on Rotten Tomatoes. Check out this link for a great interview with Tom Hanks and Tim Allen where they talk about the friendship between Woody and Buzz Lightyear on the screen, as well as their own personal friendship off the screen.

Kyle Giersdorf went home with a prize of $3 million for winning the solo finals of the Fortnite World Cup on July 28th. He plays Fortnite under the name of “Bugha” and was one of around 100 players competing for the money. According to a report from Newzoo, a gaming and esports analytics firm, global revenues from esports, or professional video game competitions, will hit $1.1 billion in 2019, up 27 percent since last year. For comparison, Tiger Woods received $2.07 million for winning The Masters earlier this year.

There’s a first time for everything! The St. Louis Blues took home their first-ever Stanley Cup this year on June 12th. After 5 games of trading wins and losses with the Boston Bruins during the playoffs, the Blues missed their chance to clinch the penultimate game. Game seven was a nail biter in St. Louis, Missouri but eventually resulted in a 4-1 victory for the Blues.

Spoiler Alert: USA wins! After a month of playoffs, the United States faced the Netherlands on July 7th in France and walked away with a 2-0 victory. In more recent news, FIFA approved an expansion for the next World Cup. Prepare to see 32 teams in 2023’s competition! Also, on July 29th, the U.S. Soccer President, Carlos Cardeiro released an open letter regarding the lawsuit for equal pay filed by the champions months prior to their victory. Read the letter here.

With the bar exam only a few days away, the State Bar of California accidentally released the essay prompt topics to select California schools. In an attempt to even the playing field, they proceeded with an email blast revealing the topics to all CA bar takers. Like all unprecedented cases, many testers are eagerly awaiting the effects of this debacle. Link to the official statement put out by the State Bar of California can be found here.

Are you busy on Friday, September 20th at 3:00 in the morning? Thousands of people have RSVPed to “Storm Area 51, They Can’t Stop All of Us” through Facebook in pursuit to see extraterrestrial activity. Disclaimer: AdaptiBar does not suggest or encourage anyone to participate in raiding the top-secret United States Air Force base located in the Nevada Test and Training Range.

Gon’ and do the two-step then cowboy boogie

Grab your sweetheart and spin out with ’em

Do the hoedown and get into it

TikTok videos have been on the rise this summer more than ever. One of the most popularly used songs is “The Git Up” by Blanco Brown and Lainey Wilson. Chances are you’ve seen or heard these lyrics in action this summer in a short video clip while scrolling through social media. Now that you’re no longer studying all day, you’ll have plenty of time to practice your cinematography skills and dance moves (or maybe just watch others’).

Have you ever desired to open a bottle by means of spin kick? Join John Mayer, Jason Statham, Max Holloway, Mariah Carey, Ryan Reynolds, Justin Bieber, Conor McGregor, and many others in this trend. To get started, place a bottle with a very loosely closed cap on a table about waist high. Next, try out your best spinning hook kick but only graze the very top of the bottle to send the cap sailing. Remember to practice your MMA skills responsibly!

Now that you’re done studying for and taking the bar exam, it’s time to kick back and relax! We hope you’ve enjoyed this recap of what you may have missed while you were deep into your studying.