What Law Should I Apply on the MBE? 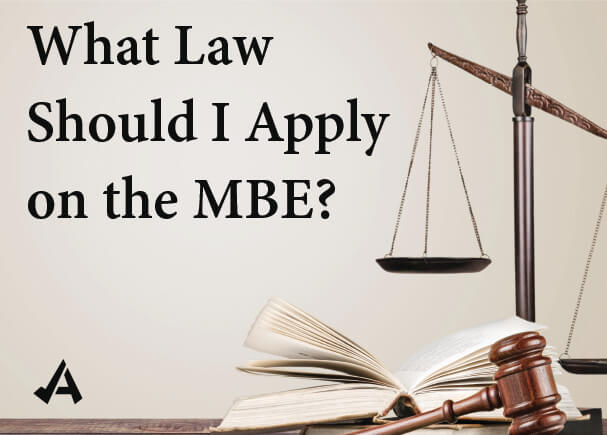 When you were in law school you probably learned about common law, state statutes, codes, federal rules, and majority and minority approaches to certain topics sometimes all in the same lecture. You may have had to know all of these rules for your law school exam. Now that it’s time for the bar exam, it can be hard to recall all of these rules and know which ones you should be applying on the MBE. This can often get confusing and overwhelming. Don’t worry, we’ve got your back! We’ve compiled a list of the most common distinctions broken down by subject. Get ready to crush the MBE!

The MBE only tests the Federal Rules of Civil Procedure, so be sure to apply only the FRCP and not state rules you may have learned in law school or at your jobs and internships. Review important Supreme Court cases on procedural issues, like Eerie and cases relating to personal and subject-matter jurisdiction. You won’t be asked about case names, but you will have to apply the rules that come from the holdings. Civil Procedure questions have a heavy focus on the rules directly from the FRCP, and the answer choices are often based on technical “rule language.”

Constitutional Law on the MBE is, naturally, comprised of case law from the Supreme Court and the Constitution itself. Therefore, it ends up being one of the most theoretical subjects tested. However, the format of the MBE does not lend itself to open-ended hypotheticals, like the ones you were asked in law school. Therefore, Constitutional Law questions on the MBE will be based on cases and rules that have already been decided by the Court. Also keep in mind, that although this was a busy term for the Supreme Court, any new recent holdings will not affect your exam. It takes several years before new rulings are incorporated into the exam.

The default rule for Contracts is to apply the common law. However, for Contracts that cover the sale of goods, the UCC applies over common law. The examiners will expect you to be able to recognize a sales contract and apply the UCC without being told to do so directly. Below are the major distinctions between the UCC and common law.

Criminal Procedure questions, which are tested as a subtopic area within Criminal Law, will often mirror past Supreme Court cases, like Constitutional Law questions. To study, you should be familiar with the most influential cases dealing with the 4th, 5th, and 6th Amendments and their holdings.

The MBE tests only the Federal Rules of Evidence. Make sure you are not applying the common law or your state’s rules, which you may also studying for the essay sections of the exam. For example, remember that the Federal Rules of Evidence do not recognize doctor–patient privilege, however nearly every jurisdiction has some type of rule that covers this privilege. Additionally, remember that the FRE does contain a hearsay exception for present sense impressions, while the common law does not.

The law of Property evolved from a complicated mix of common law, statutes, and even law from the English and French traditions. However, there are a couple distinctions between the common law and statutes that are helpful for you to know for the MBE. Keep an eye out for the topics below, and know that when you see them, you are likely being tested on a statute which you should apply verbatim.

Although, like all the other subjects, common law is the default rule, there are a few given rules you should always apply to Torts questions. For survival and wrongful death claims, you should assume that there is a statute in place. You should also assume that there is joint and several liability, with pure comparative negligence, unless you are told otherwise. Be sure to study and memorize the common law elements of the most commonly tested torts.